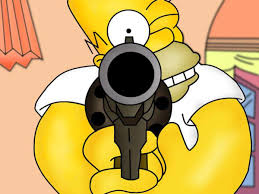 In a previous post, Defining Violence, I hoped to show you that even from a purely intellectual perspective there is more to violence than most of us believe (or have enough experience to comprehend). From a physical real world perspective it is even worse. Even when one is expecting the situation to turn violent the speed & in many cases the absolute viciousness can be stunning (think deer in the headlights). Experienced professionals, trained to respond at a faster tempo, only have a higher probability of surviving (hopefully unscathed), but certainly no guarantees. There are no fool proof systems. It's not like the movies & certainly not the same as being in an open space with a padded floor (even walls), one perfectly executed attack at a time. Not to say that these types of training aren't useful. It's a matter of understanding that the real world is different. As with defining violence, it's a case of there is just so much more.

Real violence can happen in almost any setting & at virtually any time. There can be all kinds of obstacles / weapons & allies, obvious, unseen & hidden. Remember that the vast majority of violence is personal, it happens in kitchens, stadiums, bars, parking lots... One thing my years of working in security & emergency rooms taught me was there is no limit to what humans are prepared to do to each other. Most violence doesn't have serious consequences (due to it's motive, see behavioural correction below), but still very often ends with serious permanent physical damage & even death. Just look at how many murders there are in the world every day (the vast majority personal). I could tell hundreds of shocking & gory stories, but this isn't about fear-mongering. I want you to understand that violence is something best avoided & the good news is that the majority of violence is avoidable.

In order to avoid violence we need to understand why it happens. Understanding the motives for the violence (remember violence is always for gain), gives insight into how to avoid it. Peyton Quinn's 4 types of violence gives us a good framework & are listed in order of the increasing difficulty to avoid / de-escalate. It is worth remembering that the types may shift during a situation & as with most things associated with violence at surprising speed.

We are naturally social animals, we seek to be part of a group (family, tribe, club, team, gang, nation etc.). Being part of a group (us) automatically implies that there are others who are not (them). Groups also tend to associate with a place or area. Like other territorial animals if we feel threatened, often due to resource scarcity, our natural instinct is to drive others off. The obvious examples are gangs, but groups of friends at the 'local' can be just as territorial & dangerous.

Following the premise that avoidance is always better than having to use force to defend yourself, it makes sense to avoid areas / places known to be dangerous. If you are away from your usual range, especially in places where alcohol is being consumed, be alert & attentive. In particular pay attention to group dynamics. If you are challenged the clues that it is a territorial issue are phrases like "my bar", "our club", "my girl" (the right 'mate' is often seen as the rarest commodity) & the challenge invariably comes with an ultimatum "leave or else". Take that as your cue to leave (unless of course you relish the thought of a fight, in which case do not claim self-defence). Do not let your pride or sense of right get you maimed or killed (more on dangerous attitudes & behaviour in a future post). It is extremely uncommon in cases of territory enforcement for the perpetrator to follow the stranger, so uncommon that the potential could never justify staying & inevitably end up fighting (remember the threat must be physical & immediate to claim self-defence).

Our natural sociability comes with conformity to ensure harmony. As with many social animals 'unacceptable' behaviour is not tolerated, but since strength lies in numbers etc. the goal is not to drive the group member off nor to maim but correct the behaviour, to enforce rules. There is always an element of punishment & in many cases it is not necessarily deemed to be violence, rather justifiable use of force. Many societies still believe that 'to spare the rod is to spoil the child'. Law enforcement is theoretically also just that. An alternate perspective is, violent suppression by the ruling class (remember violence / justifiable force depends on perspective). Since the goal is to correct & not to drive off or destroy, this is usually the 'safest form of violence' (lowest probability of serious injury). It is however by far the most common form of violence & by it's very nature it is personal. It is important to note that the more the element of punishment is emphasised the more preditorial (& dangerous) this violence becomes. Spousal & child abuse may superficially appear to be behavioural correction but the psychology / motives of the perpetrator are usually different (preditorial). Also rape often is deemed by many to be corrective / punitive which is why it is so common in certain societies but it's true roots are preditorial.

Even with the link to preditorial violence, behavioural correction is in fact much more closely related to fighting. When friends, family & couples fight, whether it becomes physically violent or not (remember not all violence is physical), it is because one or both parties believe the others behaviour is 'abhorrent' & in need of correction. This is why many reports of apparent spousal abuse are not taken further by the judicial system, the parties where in fact fighting. All too often at least one party is justifiably aggrieved & angry, not necessarily looking to punish. They may use threat displays & even threats of violence in order to correct the misconduct. This is usually in the form of an ultimatum "fix x or else" & again this should be the cue to de-escalate the situation. Diplomacy, knowing how to set boundaries effectively & understanding the difference between being assertive & aggressive (on the part of both parties) should take care of the situation (more on these topics in a future post). If the aggrieved party feels ignored or challenged they will often lash out. It is usually a quick strike & back to posturing & demanding, the intent again is not to cause harm but to correct. It is widely accepted in psychology that when one party walks away from an argument it is usually to prevent themselves from becoming physically violent, this is not the time to taunt (more on this in the future post on dangerous attitudes & behaviour).

The motive of criminal violence is profit. This violence unlike the other 3 is not about you but rather about what you have that is of value. That is not to say that it won't be directed at you nor that you won't be hurt or killed but it is the least likely to turn physical. Most criminals will use threats to get what they want as resorting to violence has many potential complications (not least of which the risk of injury to themselves). Here your ultimatum is in the form of "give me your ... or I'll...". This is likely to be a scenario where claiming self-defence is justifiable (as long as you don't cross the line), but are any of your possessions worth losing your life over? Hardened & desperate (a large proportion of crime in this country is due to desperation) criminals are likely to do serious harm without compunction if they feel the need. As previously stated most people simply don't have the experience to grasp the speed or magnitude of violence. Unless you clearly have the advantage it is better to simply hand over the goods.

Unlike the other types of violence where once the goal has been achieved the violence (or threat thereof) ends, here your victimisation is the goal. For this reason this is by far the most difficult kind of violence to avoid once you have been targeted. Preditorial violence is in the majority of instances about revenge for emotional harm (& sometimes other, like financial). Basically you've done something (sometimes unintentionally) that has pissed them off to the point where only hurting you will appease them. When faced with the threat of any of the other 3 types of violence it is your actions & words that can cause the situation to become preditorial. If you insult or in some other way cause the perpetrator to lose face there is a very good chance that he will come after you. It's not only in potentially violent situations where you may "piss someone off" to the extent that they become preditorial. Very often those who are 'victims' of preditorial violence can be heard saying: "I didn't know...", "I was emotional...", "I have the right..." & "even if I did insult him / hurt his feelings, he has no right to...". Those are usually signs that they, the 'victim' is likely to have launched a violent verbal / emotional attack themselves, which then lead to the physical violence. Learning how to set boundaries, be assertive not aggressive & to avoid dangerous attitudes & behaviours will help you avoid this kind of violence (more on these topics in future posts).

There is another more dangerous form of preditorial violence. The kind where the victimisation provides pleasure or a sense of power / justification. These are the stalkers, rapists, serial murders etc.. Very often they don't know their victims & the victims seldom know they are targeted...