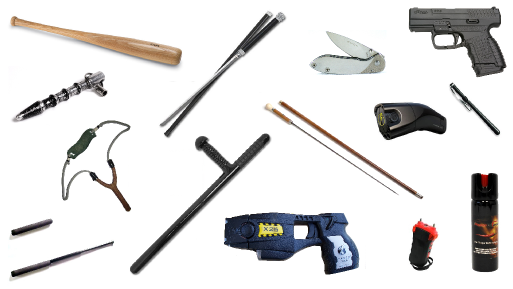 As with so many questions in life, this one you have to ultimately decide for yourself, however I'd like to offer some points to consider.

If you are attacked by someone with a weapon & you don't have one to even the odds, then it sucks to be you. If you choose not to carry a weapon, then you are purposefully deciding that it will always suck to be you. - paraphrasing Michael D Janich

With that said it is important to remember that...

a weapon is always a last resort.

Remember the threat has to be both physical & immediate before you can act in self-defence. More so if you are going to use lethal force, which using a 'dangerous weapon' is. The response should match the attack. Pulling out a knife & slashing someone for punching you in the face will be very difficult to justify.

What can you legally carry?

As we are based in South Africa we will only address South African Law. Even if you disagree with the law or even with being governed it is worth knowing where you stand (ignorance is not a defence).

The Firearms Control Act, as the name implies sets out the laws related to fire arms & the Dangerous Weapons Bill (DWB) for all other 'weapons' including 'imitation / replica firearms' (yes under some circumstances it is illegal to carry toy guns & paintball markers). If your weapon of choice is a firearm you will need to go through the appropriate training & licensing which should answer your questions, so I'll only deal with 'dangerous weapons' here. So what is a dangerous weapon? From the DWB:

...any object, other than a firearm, designed as a weapon and capable of producing death or seriously bodily harm... (my emphasis)

Is the knife you carry "designed as a weapon" or a tool? Is that kubotan a weapon or a keyring? Who decides?

Section 2 of the DWB, Prohibition of possession of dangerous weapons, firearms and replicas or imitations firearms, also prescribes either a fine or prison sentence for carrying a "dangerous weapon" in certain circumstances...

(1) Any person who is in possession of—

(a) any dangerous weapon; or

(b) any firearm, replica or imitation firearm,

under circumstances which may raise a reasonable suspicion that the person intends to use the dangerous weapon, firearm, replica or imitation firearm for unlawful purpose, is guilty of an offence (my emphasis) and liable on conviction to a fine or to imprisonment for a period not exceeding three years.

(2) In determining whether a person intends to use the dangerous weapon, firearm, replica or imitation firearm for an unlawful purpose, all relevant factors, including but not limited to the following, must be taken into account:

(a) The place and time where the person is found;

(b) the general behaviour of the person, including the making of any threat or intimidatory behaviour;

(c) the manner in which the dangerous weapon, firearm, replica or imitation firearm is carried or displayed;

(d) whether the possession of the dangerous weapon, firearm, replica or imitation firearm was within the context of drug dealing, gang association or any organised crime activity; or

So in essence you are allowed to carry any weapon you choose (firearms have to be licensed) except if there is reasonable suspicion that you intend to do something illegal with it. Please note: not unless you do something illegal but if there is suspicion you might. i.e. if a policeman (& we all know none of them are corrupt...) believes you are suspicious & that what you are carrying is a 'dangerous weapon' he must arrest you. That seems to be in contradiction of the right to be presumed innocent & hence certainly unjust (sign the petition if you feel strongly enough). Also note that the DWB doesn't make provision for a policeman to merely confiscate the weapon/s... he must arrest you too. Unjust or not it is the law & you are subject to it...

With that in mind if you choose to carry something choose wisely. If you choose to carry one, make sure your knife really is a tool. The easiest way to ensure this is to buy one that you use regularly as a tool (most 'tactical' & 'fighting' knives make poor tools). A small steel / aluminium tubed 'penlite torch' makes a wonderful kubotan for example & won't raise nearly as much suspicion. Temporarily blinding an assailant with a bright light is a great tactic to buy time to get away too. Pepper spray in someone's face or shocking them with a tazer is a lot easier to explain than why you stabbed or slashed them (multiple times?).

Can / Will you train to use it effectively?

If you are not prepared to put in the hours it takes to be able to access & use the weapon effectively under the most extreme circumstances, it will probably be of more use to your assailant/s than you.

Could you live with the aftermath, legal & psychological?

Post Traumatic Stress Disorder is real & can (& mostly does) affect anyone who has had to deal with violence. The toughest of the tough crumble when faced with the realities of taking someone's life or maiming an individual. Ultimately you will have to deal with the psychological consequences of your actions.As you should by now know, if you have had to defend yourself with force there is a high probability you will have to deal with the legal system. If you have had to resort to lethal force it is virtually guaranteed you will be charged. There is not only the inconvenience of being arrested & having to go to court; there are also the realities of been thrown into holding cells with hardened criminals. The massive bill from your lawyer may not be enough to to keep you from going to prison, where those realities will be your daily routine, either. Remember in almost every case where violence has been committed both parties claim self-defence & the state has no favourites (or at least, it shouldn't).