This post was inspired by me having comfortably run a sub 2 hour 21km, 'barefoot', after only 9 weeks of running. More detail later. I wore barefoot shoes for this particular run.It is generally accepted that somewhere between 40 - 50% of runners are injured every year (Some say 80 - 90%. The difference? How one defines 'injury'.). Running injuries are classic overuse injuries: they are caused by poor bio-mechanics or lack of conditioning. While bipedal gait is the definitive movement of humans, running is a high level skill that needs to be trained in order to be performed in an efficient injury free way. It would appear that correct running technique is fairly 'universal', it is the same whether the runner is shod or not (I will however briefly venture into the 'barefoot' vs shoes debate).Multiple analyses of top runners confirm that it most efficient & powerful to run on the balls of the feet. The foot lands lightly below the centre of gravity (the hips) with the knee slightly bent. The primary driving force is a pull through with backline, largely the glutes & hamstrings. The speed is directly linked to how high the heel is brought up i.e. the strength of the pull through. The leg is then cycled forward & the process repeated. Strides are relatively short & the stride length increases with speed, not because the runner 'extends' but rather because they move further through the air before landing. The posture is upright (note that the infographic above shows a sprinters posture) & the cadence is high at around 180bpm to take advantage of the elastic recoil of the myo-fascia (stretch shorten cycle). The motion is initiated & controlled from the hips & core. Arms are held at 90 degrees with the circular motion coming from the shoulders. There is very little lateral movement & certainly no heal strike.

It is the heal strike that defines jogging &, along with poor conditioning, is a major cause injuries & is largely the basis of the running shoe industry. Dysfunctional movement i.e. issues with mobility, flexibility & stability will also likely manifest as overuse injuries.

Whether you are already running or not there are 4 things you can focus on to prevent injuries:

Start with a movement screening. If dysfunctions are highlighted, these should be addressed with myo-fascial release, stretching & movement conditioning. You ideally should not start a running programme unless you are able to:

There is no better way to train for running than by running. Ensure that you have a well thought out scientifically backed training programme & above all focus on correct form.

Rather than focussing on specific muscles strength training should focus on strengthening the movement. Movements that activate & strengthen gait as well as those that strengthen the cores ability to stabilise & anti-rotate should be emphasised. Here a well planned programme should be followed throughout, not just before you start.

Overtraining Syndrome is a serious risk. Fortunately a well designed programme will have sufficient rest, but it is always worth while listening to your body. In a previous post, I discussed strategies to ensure that you are well fuelled for recovery & performance. I will be following this post up with an analysis of my diet.

If you are already running & want to change to barefoot running it is important to realise that, especially if you've been jogging, your conditioning may not translate directly & it is therefore important to transition slowly. Start with one short barefoot run per week, 2 - 5km & increase slowly.

Running barefoot is gaining popularity because it is more natural & allows for better balance & control. It is also touted as a cure for running injuries. The first claim is obviously true, running shoes have been around for a very short time & anywhere where balance & control are important shoes are minimised or eliminated, think about the martial arts, dancing & gymnastics for example.The injury risk reduction issue is clouded. Doctors, physiotherapists etc. are reporting an increasing number of barefoot running injuries. It is as yet difficult to tell whether this increase is proportionate with the increase in barefoot runners or lower / higher. Also not all injuries are seen by professionals. There is also likely to be a higher than expected rate when runners convert to barefoot without the appropriate conditioning.I am willing to stick my neck out though & say that I believe the rate should be lower with barefoot runners because your form automatically improves due to the greater sensitivity & proprioception. It takes a very short while (seconds in most cases) for heal strike runners to shift to the ball of the foot when running barefoot on a hard surface like tar.

While a 1:56 21km is not super fast, it is in fact just 5min faster than the median for men, it was done as a long slow training run not in a race & it was very comfortable.Starting out I suppose I did have a better base than most. I've been involved in sport most of my life, including the 30years or so in the martial arts, a long history of swimming & some fairly serious cycling more than a decade ago. At the time I dabbled in triathlon but struggled with the running (lack of form & training where the major problems). I was taught proper running form by a training partner just before I stopped due to an unrelated knee injury.I've been considering running, in particular barefoot for some time. It just seems the most natural thing to do & recently there has been a great incentive, training with my new ultra-marathon running partner, Lyndall.Since I've spent the last few years focusing on correcting movement dysfunction & strengthening the primal movements, developing gross athleticism in my clients & myself meeting the minimum requirements as set out above was easy. None the less I started slowly & cautiously. I've only increased mileage & pace as my body has allowed. I've ensured adequate rest & my nutrition, as always, has been a primary focus. I will be analysing my diet in detail in the next post. 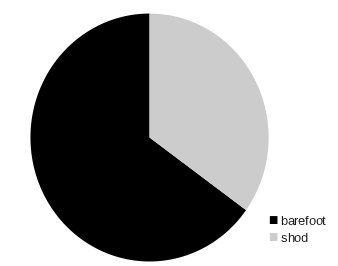 The majority, 66%, of the the 286km I ran in the 1st 9 weeks was completely barefoot. I've only worn my 'barefoot' shoes as a safety precaution when the runs have been over terrain that I was uncertain of or the run was longer than I suspect my feet are currently conditioned for. I can only run about 15km barefoot at the moment before my feet start to complain, not that they are ever raw or injured or even show signs of wear.

The above graph is a summary of the training & shows again why it is so important to keep meticulous records. The bars show the distance run per week per type listed & colour coded by intensity (recovery to race) & are read off the left axis. The lines show the pace of the slowest run, the average for all runs, the fastest run & the fastest pace achieved in any run for the week & are read of the right axis. As expected as the runs were differentiated into types the various paces spread confirming that they were executed properly. This is important as the most common & probably the most dangerous 'rookie error' is pushing pace on every run rather than trusting the programme / process & performing each run as intended.